My first time (with kale)

Kale is all over the blogosphere!! I haven't met a vegetable I didn't like, so I thought I'd give it a try.

I bought 2 large bunches and used one for kale chips and the other for a massaged kale salad, one of my friend Roz's favourite lunches. 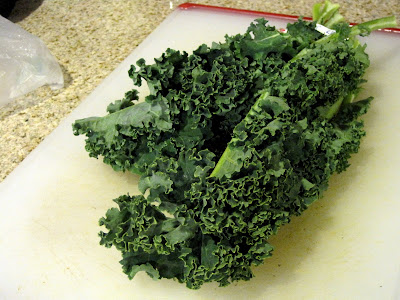 I prepped the kale by cutting out the large stems, ripping it into nice-sized chunks and then washing and drying them. Then I placed the kale on 2 aluminum-foil covered baking sheets, sprayed both sides with olive oil using my Misto, and sprinkled them with Kosher salt. Then into the oven at 375 they went. The recipe I followed said they'd take 10-15 min, but after 8 min they were done and starting to burn. 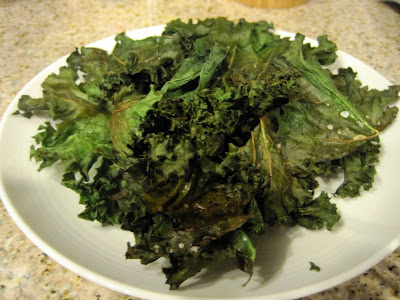 Verdict: They were OK. The first one I had, I tasted a lot of bitter kale, but the more I had the more I liked them. I could see mindlessly munching on them instead of potato chips. They had a great chippy texture that I quite liked. Very crunchy, salty, and a little oily. I think I would make these again. 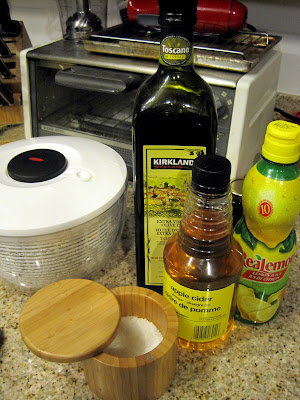 Again, I prepared the kale into bite-sized pieces and washed it. Then I put it in a large bowl and added some olive oil, apple cider vinegar, lemon juice, and kosher salt. I massaged the kale for about 3 minutes. It reduced but not as much as I expected. So I added some more "dressing" and massaged it for another few minutes and it didn't get any smaller. I used the Curly leaved kale, which is apparently the hardest to break-down, so maybe that's part of it. Then I split the kale into 2 containers and topped it with grapes, dried cranberries, and goat cheese. 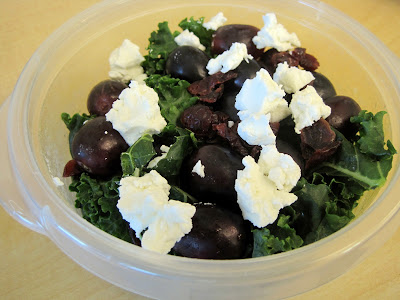 Verdict: I didn't really enjoy it. I found that kale smelly and too tough. Even after sitting overnight in the vinegar/oil/salt/lemon juice mixture it still hadn't broken down that much. Or maybe that's how it's supposed to be? I found the flavour a bit harsh, but really enjoyed the grapes and goat cheese! Unfortunately, I do have a second salad all made up for tomorrow, but honestly...not sure it's going to get eaten. 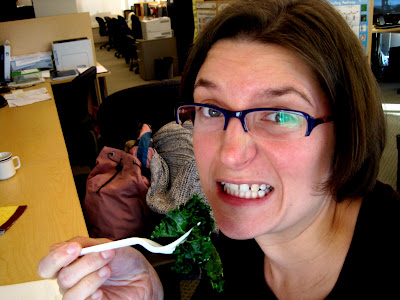 I always like trying new recipes. I actually made Roz's Asian Lettuce Wraps last night for dinner and they turned out really well (I get a lot of inspiration from that gal)! So win some, lose some!


What do you think - do you like kale? Any tips for my kale salad??

Email ThisBlogThis!Share to TwitterShare to FacebookShare to Pinterest
Labels: Recipes