Celebrating one year at goal weight!

It was exactly one year ago this week that I reached my goal weight for the first time. I'm happy to say that (one year later) I'm still there! I weighed in tonight at my WW meeting right on target, like I have at least once a month since last January. It is essential for me to have that accountability in place. I've never gotten more than 5 or 6 lbs above my goal weight, but I think a large part of that is knowing I *have* to weigh in once a month (I like having goals). Either way I'm happy to say it's worked! The receptionist at my meeting tonight made me feel pretty good. She said that most people who are going to gain it back do so in the first year, so the fact that I'm still going strong is a good sign. I realize this will be something I have to work at for the rest of my life, but feeling like I do and being content with my body makes it so worth it.

Besides, I get to eat some pretty good stuff!! Tonight at WW I shared that the thing that's helped me the most was focusing on all the healthy, yummy food I can eat, rather than what I can't. Here's what I ate today.

Breakfast this morning was 2 egg whites on a sandwich thin with marinara sauce. Yum!! 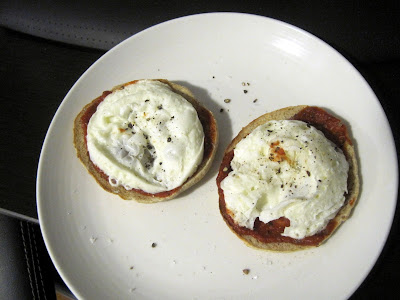 For lunch I had my usually bowl of vegetable soup, but I didn't feel like making a salad. 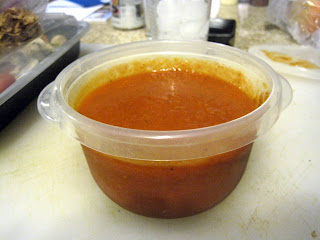 Instead I went to Whole Foods and bought a Mediterranean Salad Shaker.  I love this salad! It has chick peas, red pepper, tomato, spinach, yellow squash, carrots, and kalmata olives. The dressing is an oil-free balsamic dressing (balsamic vinegar, nutritional yeast, maybe some mustard, and a bunch of spices). 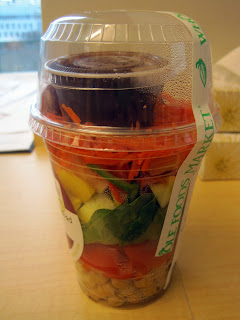 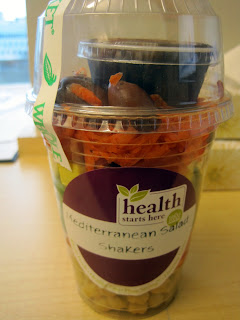 You just pour on some dressing and shake-shake-shake!! It's seriously delicious and extremely low-point.

In the afternoon I was craving dark chocolate. So I had four squares (60 calories worth) of this Maya Gold chocolate bar. (Sorry for the fuzzy picture!) It is dark chocolate with spices and orange. It was soooo good with a cup of coffee! 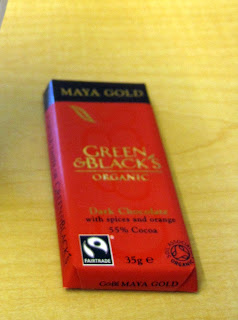 Then at our WW meeting I was pretty hungry so Roz kindly offered me a pack of WW Popped BBQ Potato Crips. Oh my goodness, were they ever good! And you get so many for only 2 points. That's it - I was hooked and bought my own box on the spot!

Dinner tonight was a basic omelette. I tried out Lori's omlette technique a while back and love it!! Tonight was broccoli, peppers, olives, cheese, and hot sauce. Yes, an interesting combination, but it hit the spot! (Also this picture makes the omelette look way smaller than it is. It's an egg plus 2 egg whites and was actually huge!) 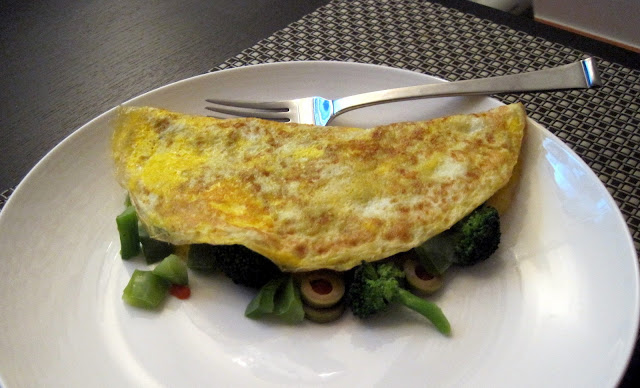 Then later I had a hot brownie sundae. Ok, it was just a warm Fibre One brownie topped with fat-free vanilla yogurt, but it was delicious. I forgot to take a picture until after I had already dug in! 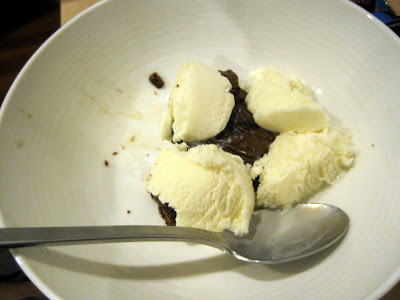 I just realized that today was meatless. Tomorrow I will make sure I get some more protein!

Knowing that I had to weigh in tonight really helped me focus on losing the last of my holiday weight. Now that I'm back at goal weight I want to see if I can lose another couple of pounds. Ideally, I'd like to reach a comfortable weight where I could weigh in any day, at any time, wearing any clothes, after eating any meal, and be at goal weight. That's my ultimate goal. But in the meantime, thanks to my WW buddy Roz for the good walk-and-talk and all the support along the way :)
Posted by Melisa at 11:34 PM